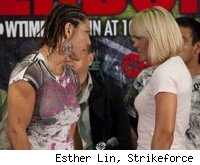 SAN JOSE, Calif. – There are underdogs, and then there's Jan Finney. The Washington Generals have had better odds against the Harlem Globetrotters. The Joker's henchmen stood a better chance of taking out Batman.

At least, that's what online oddsmakers say. Depending on which sportsbook you consult, she's somewhere between a 7-1 and 11-1 underdog against Strikeforce 145-pound women's champ Cristiane "Cyborg" Santos. That could be due to her unimpressive 8-7 record, or the fact that she's making the leap from regional promotions to a title fight against perhaps the most intimidating female fighter on the planet, and on the biggest stage for women's MMA.

It's not exactly a ringing endorsement, but it's also not one that Finney is paying much attention to.

"I think it's funny," Finney told MMA Fighting. "I use that stuff as motivation. If anything, I think it can kind of play games with Cris' head. She might take me too lightly."

If you hadn't heard of Finney before she was called up for this title shot, you aren't alone. Strikeforce CEO Scott Coker said at Thursday's press conference that his matchmaking team discovered her on YouTube. A Strikeforce representative also told MMA Fighting that her continued employment with the company is contingent upon her performance on Saturday night, meaning she could well be cut immediately after fighting for the belt.

In short, if she makes it out of the first round against the feared Santos, she'll already have surpassed expectations. That seems as if it might be news to her, though.

While Finney admits that her family and friends were a little concerned for her when they first heard she'd be taking on "Cyborg," she insists that she's not intimidated.

"She's just a person, you know? People forget, this is a sport, but we're also entertainers. I think she's using a persona. Especially with her opponents, she likes to adopt that and kind of try to get in their heads. I think it's actually kind of funny."

Santos' previous opponents aren't laughing. In her time with both Strikeforce and EliteXC, the Brazilian proved to be every bit as terrifying inside the cage as she is in pre-fight staredowns. After battering "the face of women's MMA" in her title bout with Gina Carano, she went on to defend the belt with little trouble against experienced vet Marloes Coenen.

It seems hard to believe that Finney might be the one to turn that tide, but she claims that Santos isn't as flawless as some people think.

"I think she's sometimes too aggressive. That can be a weakness. And everybody makes mistakes. She makes mistakes, like when she threw Gina on top of her. I'm not going to give up mount like that."

Finney, an Ohio native who works as a personal trainer, points out that people should take a hard look at her record before they judge her too harshly by it. Of her seven losses, noted contenders Julie Kedzie, Erin Toughhill, and Miesha Tate account for five of them.

"And Miesha Tate, really I didn't lose to her," Finney said. "It was a draw, but it was a tournament and they needed a winner, so the referee picked her. It's not like I lost to chumps."

That's a good thing, since Santos is about as far from a chump as you can get in women's MMA. She's likely the strongest female fighter in any division, and her vicious striking has created serious problems even for stand-up specialists.

But Finney? To her it's just another fight, she said. Sure, she's never fought in front of the kind of crowd that will flock to the HP Pavillion in San Jose on Saturday night, nor has she ever been featured on Showtime before, but that's not what worries her.

"I think the biggest problem with nerves for me is when I have to talk," she said. "Interviews, stuff like this. I'm deathly afraid of when I have to talk in front of a bunch of people, but I guess it gets easier the more you do it. I feel like once I step into the cage, that nervousness kind of goes away. I'm usually scared of tripping or falling on my way to the cage, but in the fight I think I'll be fine."

Well, maybe not fine, but who knows? Even the Joker's henchmen had a good day every now and then.