Fedor Emelianenko: Fabricio Werdum Is One of the Greatest Fighters in MMA 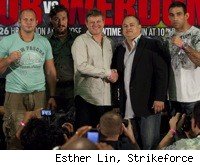 The time for talking is officially over, as headliners Fedor Emelianenko and Fabricio Werdum met with the press Thursday afternoon in San Jose, Calif., to discuss their Strikeforce/M-1 Global main event on Saturday night.

Emelianenko explained why he thought Werdum is one of the "greatest" fighters in MMA, while Werdum discussed his game plan going into the fight of his life.

Watch a highlight video of the press conference, shot and edited by MMA Fighting's E. Casey Leydon, below.