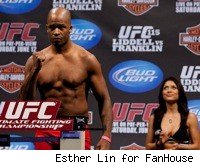 This marks the third time since 2006 that Loiseau has been let go from the organization.

Pavia said that Loiseau has not decided whether or not he will retire from MMA, but the 10-year veteran will take some time off to regroup and think about his future options.

Share Loiseau has always maintained that it's UFC or bust for him, but it appears as though his chances with the organization have run out.

Since losing a middleweight title fight to then-champion Rich Franklin in February 2006, Loiseau has a record of 5-5, which also includes a UFC 97 loss to Ed Herman.

Riddum.com spoke to Loiseau's trainer Firas Zahabi and friend Patrick Cote about the anxiety that has plagued Loiseau's fighting career since his loss to Franklin.