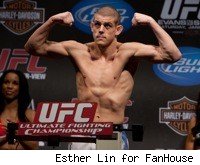 UFC 118 will mark the organization's first foray to the Boston area, and when Spike TV airs its now customary prelim special prior to the event, the featured fights will showcase some of the most popular fighters to come out of Beantown.

The lightweight scrap between Joe Lauzon, a native of Bridgewater, Mass., and Terry Etim and the middleweight fight between Milford, Mass., native Jorge Rivera and Alessio Sakara will air live on Spike, the network announced Thursday.

Lauzon (18-5) is coming off a unanimous decision loss to Sam Stout at UFC 108. Prior to that loss, The Ultimate Fighter 5 alum had won his last two fights in a row. Etim (14-3), meanwhile, saw his four-fight winning streak come to an end at UFC 112 when he was submitted by Rafael dos Anjos.

UFC 118 is headlined by a triple main event featuring BJ Penn vs. Frankie Edgar for the lightweight title, Randy Couture vs. James Toney and Kenny Florian vs. Gray Maynard. The event will air live on PPV from the TD Garden in Boston on Aug. 28.