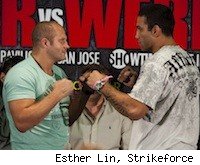 SAN JOSE, Calif. – While most of the other fighters in attendance at Thursday afternoon's Strikeforce "Fedor vs. Werdum" press conference at the HP Pavillion entered wearing garish MMA-themed t-shirts and menacing stares, Fedor Emelianenko strolled in wearing a faded t-shirt, a beat-up pair of cargo shorts, and a shy smile as he was greeted with a hug from opponent Fabricio Werdum.

Flanked by executives from M-1 Global and backed by his trusty translator, Emelianenko slumped in his chair and offered the occasional reluctant grin when questioned about his status as one of the most dangerous heavyweights in the sport.

And while oddsmakers and onlookers may not be giving Werdum much of a chance, Emelianenko insisted that his opponent was among the best big men in MMA.

"This fight is of really great importance to me because Fabricio is one of the greatest fighters and he belongs to the top ten fighters and he proved that long ago," Emelianenko said via an interpreter. "He fought with a lot of great names."

Emelianenko, who's been even more media shy than usual this week, admitted that he prefers to "stay in the shade," but accepts the interviews and press conferences as a part of his job.

Werdum, on the other hand, was joined by a posse of Brazilian cohorts who cheered him on throughout the presser. He admitted that he has a special game plan for this fight, and called the showdown with Fedor the fight he's been working towards his entire life.

In fact, the only time the Brazilian was at a loss was when he was asked by a particularly verbose Russian TV reporter to identify Emelianenko's greatest weakness.

In a fight with even longer odds, Strikeforce 145-pound champ Cristiane "Cyborg" Santos matches up against 8-7 fighter Jan Finney, who Strikeforce CEO Scott Coker said he scouted with his matchmaking team via YouTube.

"We sat down with our matchmakers and we identified Jan as an opponent that we thought was qualified," Coker said of the 11-1 underdog out of Ohio. "She's obviously in great shape, and I'm very interested to see what's going to happen in this fight."

As for the crowd Coker is expecting on Saturday night, the Strikeforce boss said there were still tickets available, but noted that sales were trending ahead of the "Carano vs. Cyborg" event last August, and on par with the "Shamrock vs. Le" event from 2008.

For fans who can't make it to the arena and don't have a subscription to Showtime, the event will be available on a pay-per-view simulcast via "Strikeforce All Access" on the Showtime website, where fans will get the opportunity to choose their own camera angles throughout the event.