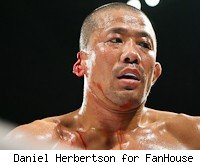 After a large part of his ear was ripped off in a Pancrase bout with Masaya Takita almost three weeks ago, Shigeyuki Uchiyama underwent multiple surgeries utilizing veins from his thigh to reattach his ear and has now been released from the hospital.

Uchiyama was finally released on Wednesday, but he was originally set for release back on June 15th. Complications arose after the first surgery due to the heavily cauliflowered nature of Uchiyama's ear and further surgery was needed. Doctors will be checking the ear regularly over the next 20 days but they have declared the surgery a success and Uchiyama is already back in the gym.

Pancrase officials are conducting an investigation into how the ear was torn off, but no results have been released yet. The accident occurred when both fighters fell through the ropes during a takedown attempt. As Takita's hands seemed to be nowhere near Uchiyama's head, it can be presumed at this stage that the ropes severed the ear.

Blood could be seen on the top rope directly above where Uchiyama's ear lay on the canvas but inspection of the ropes revealed nothing dangerous. The horizontal ropes were covered in soft plastic tubing and seemed safe, but the vertical supporting ropes were two bits of thinner rope. It is conceivable that Uchiyama's ear may have got caught up there but no blood could be seen on those ropes and the accident occurred about two feet from vertical supports.

Prior to the accident, Uchiyama was keeping his MMA career a secret from his employer.