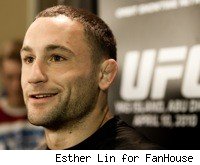 The UFC will be well-represented at the 2010 ESPY Awards, as two of the organization's champions were announced Thursday as nominees for two separate categories.

The 18th annual ESPY Awards ceremony will air on ESPN live from the Nokia Theatre in Los Angeles on Wednesday, July 14, 2010 at 9PM ET.
GSP and Edgar are the only two MMA fighters to be nominated for an award. It's also interesting to note that both fighters are represented by the same agent: Shari L. Spencer.

In his only fight of 2010, St-Pierre defeated Dan Hardy via unanimous decision. The win marked his fourth consecutive successful title defense.

GSP is currently serving as a coach on the 12th season of The Ultimate Fighter, and will defend his title against opposing coach Josh Koscheck in December. Also nominated for Best Fighter is boxers Floyd Mayweather Jr. and Manny Pacquaio.

Edgar's win over Penn is considered to be one of the biggest upsets of the year in MMA. The loss marked Penn's first as a lightweight since 2002. But the native of Toms River, N.J., will have to prove that his win was no fluke at UFC 118 in August against Penn in a rematch.

Edgar's competition for this award is the University of Hawaii's women's softball victory over No. 1 Alabama, Northern Iowa defeating Kansas in the NCAA tournament and 110th-ranked Y.E. Yang defeating Tiger Woods in the PGA championship.