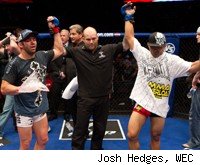 MMA Fighting received the list of suspensions in an e-mail from Pat Reid, the commission's executive director.

Main event lightweights Jamie Varner and Kamal Shalorus, who battled to a controversial draw, both received indefinite suspensions due to broken bones. Varner will need a doctor's clearance before he can fight again, plus X-rays on his broken right hand and right foot, not to mention a clean bill of health on his left ribs. Shalorus will also need a doctor's clearance before his next fight and X-rays on both hands and his lower right leg.

Canadians Mark Hominick and Yves Jabouin, whose co-main event bout won Fight of the Night honors, each were handed 30-day suspensions, as were WIll Campuzano and Diego Nunes.

And Karen Darabedyan, Josh Grispi, Will Kerr and Erik Koch were suspended for seven days each.

WEC 49 took place at Rexall Place in Edmonton and was the WEC's first event in Canada.