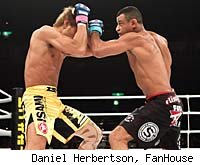 On Sunday in Japan, Marlon Sandro needed just 38 seconds to knock out Masanori Kanehara at Sengoku 13. On Sunday in Canada, Josh Grispi needed just 2:33 to choke out LC Davis at WEC 49.

If you love MMA and want to see the best fighters in big fights, it's disappointing that Sandro and Grispi got so little attention for what they accomplished on Sunday. Sandro's fight wasn't televised at all on North American television (it will air on tape delay Friday night on HDNet), while Grispi's fight was the No. 3 bout on a fight card that got weak ratings on Versus. There are still a whole lot of people who follow MMA but don't know who Sandro and Grispi are.

And they don't know what they're missing: Two of the Top 10 feathwerights in the world. See where they rank below.

Top 10 Featherweights in MMA
1. Jose Aldo (1): Undoubtedly the best featherweight in the sport at age 23, it's a little scary to consider how good Aldo might become some day. I don't see a lot of challenges for him on the horizon.

2. Manny Gamburyan (2): Gamburyan is probably next in line for Aldo, probably some time in the fall. Gamburyan earned a title shot by knocking out Mike Brown, but he'd be a huge underdog against Aldo -- as would everyone else at 145 pounds.

3. Mike Brown (3): No word yet on what's next for Brown after that ugly knockout loss, but I'm guessing the WEC gives him a fairly easy opponent to help him bounce back. Based on what he's accomplished in the cage to date he deserves this lofty ranking, but he'll turn 35 in September, and he's probably past the age where we can expect him to contend for a featherweight title again.

4. Urijah Faber (4): This might be the last time we see Faber on the list of featherweights. Faber's next fight will be at bantamweight against Takeya Mizugaki, and if he's successful, look for the WEC to fast-track him to a title fight at 135 pounds -- as long as his friend and training partner Joseph Benavidez doesn't get the bantamweight belt first.

5. Marlon Sandro (5): I'd love to see Sandro sign with the WEC, where he could take on the sport's truly elite featherweights in fights American fans can watch. Unfortunately, he's a friend and training partner of Aldo's and has said he wouldn't fight him, so maybe Sandro in the WEC isn't such a great idea after all. It's a bummer how often I have to write "friend and training partner" as a reason for a big fight not to happen.

6. Josh Grispi (6) Grispi is an enormous 145-pounder, and at age 21 he's probably going to fill out a little more and move up to lightweight eventually. But I hope he gets a couple more featherweight wins and challenges for the title before moving up in class. He's a thrilling finisher -- that 2:33 stoppage of Davis was actually longer than most of his fights have lasted -- and could be ready to challenge Aldo in another year.

7. Hatsu Hioki (5): If Sandro is going to keep fighting in Japan, the tall and lanky Hioki is the best opponent he could face.

8. Michihiro Omigawa (8): I never know where to rank Omigawa. He has wins on his record over both Sandro and Hioki, but both of them were quesitonable split decisions, and his overall record of 10-8-1 is nothing to write home about. A rematch of either one of those questionable split decisions would likely result in a loss that would drop Omigawa from the rankings, but for now his resume is impressive enough for the No. 8 slot.

9. Bibiano Fernandes (9): Dream may be running out of opponents for its featherweight champion, but he's expected back in the ring in September.

10. Chad Mendes (10): Mendes will put his undefeated record on the line against Cub Swanson at WEC 50 in August. If he wins, a future fight with Grispi would make a lot of sense.