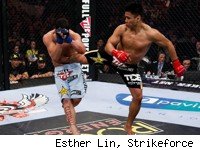 Things were going so well for Cung Le. He wasn't just beating Scott Smith; he was dominating him. He was hitting him with everything he could think of -- spinning backfists, rapid punch combos, the kind of flashy kicks that normally only work in action movies -- and he was doing it all in front of his hometown fans in San Jose.

There didn't seem to be any way he could possibly lose.

Then he got hit with one good punch, which opened the door for several more good punches. The next thing he knew he was sitting upright against the fence, his nose flattened in a sickening posture against his face while a cageside doctor aimed a light in his eyes and tried to figure out whether his brain was still in proper working condition.

There are two sides to every great comeback story. One is just as depressing as the other is exhilarating.

Share "I took it the best I could," Le told MMA Fighting during a rare moment of rest before the rematch at this weekend's Strikeforce event in San Jose. "The following day I was very sad. I started thinking, I could have done this, or I should have done that. But there's nothing you can do then. It's over."

It was Le's first loss as an MMA fighter, and the nature of Smith's improbable victory virtually assured that it would live on in highlight reels for years to come.

Because he'd been absent from the sport for over a year and a half before the fight due to his burgeoning movie career, certain questions were inevitable. Would he have still lost the fight if he had spent more time in the gym and less time on movie sets? Had his new film career made him less hungry, less focused? Had he, in other words, brought this on himself?

"Look, I have an open mind," Le said. "I go into every fight knowing that there's always a chance my number will come up. No one wins all the time. But as long as I trained hard and did what I thought I had to do to win, I can say I did my best. It definitely hurt me a lot to lose. I just tried to take the experience as a lesson and an opportunity to learn."

The lesson that night? Listen to your corner.

After he clearly won the first two rounds, Le's trainer, AKA's Javier Mendez, could see that his fighter might be starting to tire. He instructed Le to stick and move, use his speed, and avoid standing in front of the heavy-handed Smith.

"Instead I went in there and did exactly that," said Le. "I was trying to knock him out and close the show with a bang even though I was up two rounds to zero. As a result I gassed myself out a little bit."

After the loss, Le didn't have to think too hard about what he wanted to do next. He made sure Strikeforce CEO Scott Coker knew he'd jump at any chance for a rematch, and then he concentrated on getting back in the gym.

As adamant as Le is that his movie career isn't to blame for what happened to him in the third round against Smith, it's telling that he's not taking any chances this time around. He's been offered a couple of roles lately, he said, and he's even had meetings about starring in a movie of his own. Those are nice offers to have on the table when you're a 38-year-old pro fighter, and Le may very pursue them after this weekend, but they are far from his mind this week.

"I've put all movie projects aside right now to focus on the fight," Le said. "I think people get the wrong idea, like just because I did some movies I'm not focused on fighting. Whatever I do, I'm completely focused on it. When I'm training, I'm focused on training. When I'm doing movies, I'm focused on doing movies. My [acting] career has taken off, but I still love to fight. I want to fight as long as I can. At the same time, I can't fight forever. I need to make sure that the steps I take now will enable me to keep providing for my family."

Coincidentally, that family just got a little bit bigger this week. Le's wife Suzanne gave birth to the couple's first child together, a boy, after a 14-hour labor on Monday.

The effect on Le's training was that his coach deigned to give him all of one day off. The next day, after a brief visit to the hospital to check on his wife – she's doing fine and is already back on her feet because, according to Le, "she's an animal" – he was back in the gym, sweating it out on the mats to ensure that Smith's particular brand of lightning doesn't strike twice.

And for those thinking that a new baby less than a week before the fight might just add another distraction to steal Le's focus, think again.

"To me what it means is there's another mouth to feed now," Le said. "So watch out."