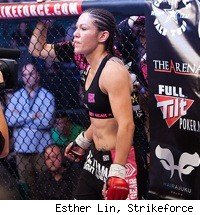 When Cris "Cyborg" Santos walks into the cage to defend her middleweight title belt against Jan Finney during Saturday's Strikeforce/M-1: Fedor vs. Werdum event, she will do so as one of the biggest favorites in recent MMA history.

According to one online betting site, Cyborg was as much as a -2500 favorite, which means you'd have to lay down a whopping $2500 for the chance to win just $100. To put that into perspective, even the almighty Fedor Emelianenko is only a -600 favorite over Fabricio Werdum, a big number, but nowhere close to Cyborg's.

The fact that a title match has such long odds is a rarity in MMA. What's the reason behind the numbers? Three main things. First, the 9-1 Cyborg has built up a reputation as a wrecking machine, with TKO stoppages in seven of her last eight matches. Second, Finney has a fairly pedestrian 8-7 record, a mark you rarely see in a bout with gold on the line. Third, Finney's strength is striking, yet most everyone believes Cyborg is the better and more powerful striker of the two. All of that means this is a money line for the history books.

MMA matchmaking and rosters have advanced to the point that it's fairly rare these days to see favorites of -1000 or more, but it does happen on occasion. Often times, it's due to late replacements or get-back-on-the-horse matchups where a star is rebounding from a loss against a far less experienced opponent, but sometimes it's due to a gold old-fashioned mismatch.

Though history tells us that the favorite is quite likely to walk away with a quick win inside of the first round, as we've seen in the unpredictable world of MMA, even these matches with wild odds end with their share of upsets. Matt Serra remains the patron saint of underdogs for his UFC 69 shocker over Georges St. Pierre, which remains the biggest title fight upset in MMA history, odds-wise. If Finney finds a way to beat Cyborg, bucking those winning odds -- likely to end up around the -2000 range -- will blow the Serra-St. Pierre -1300 out of the water.

A Finney win would also be right around the all-time greatest upset odds-wise, standing right alongside Rameau Thierry Sokoudjou's first-round KO over Antonio Rogerio Nogueira at PRIDE 33. At the time, very little was known about Sokoudjou, who was 2-1 and coming off a knockout loss.

With an assist from noted MMA linesmaker Joey Oddessa (follow him here on Twitter), the following is a partial list of recent matches with lopsided lines (odds from best available research), and how they turned out. Cyborg will soon have her chance to add her name to the list of infamy, against an opponent who is at least on a four-fight win streak. The numbers suggest it will be short, and it won't be pretty.