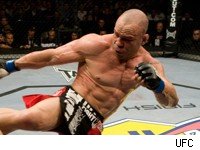 Wanderlei Silva, who was scheduled to meet Yoshihiro Akiyama at UFC 116 on July 3, has been forced to withdraw from the card due to fractured ribs suffered in training, UFC president Dana White confirmed with MMA Fighting Tuesday afternoon.

Akiyama, who defeated Alan Belcher in his UFC debut last July, will still fight on the card, and according to White, the organization is currently working on signing his replacement. No word just yet on who that might be.

Share UFC 116 is headlined by Brock Lesnar vs. Shane Carwin for the undisputed heavyweight title.