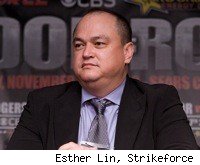 If you thought the post-fight brawl at Strikeforce: Nashville would immediately mark the end of the organization's run on CBS, think again.

Strikeforce CEO Scott Coker told MMA Fighting's weekly podcast, The MMA Hour, last week that, while nothing is set in stone just yet, the organization is shooting for a return to the network.

"We're going to re-engage in another conversation right after the Fedor fight and try to put something together in the fall," Coker said. "You know, there's no guarantees, and that was very clear from the beginning. So let's give it some time, get a better picture of what happened in the last two fights, and let's put a card together that makes sense for us, and if it makes sense for CBS, then they'll get back in the business."

When contacted by MMA Fighting, CBS officials wouldn't offer a comment on MMA's future on the network. It is also important to note that while many speculated the brawl would signal the end of Strikeforce's run on CBS, network officials never publicly stated anything of the sort.

Strikeforce has already announced that Herschel Walker will be returning to the organization in the fall, so it would make sense that the former NCAA football and NFL star (and Strikeforce's biggest mainstream star) would fight on the network. Other possibilities include "Mayhem" Miller vs. Nick Diaz, Fedor Emelianenko vs. Alistair Overeem and the return of Gina Carano.

And while UFC president Dana White recently said that he wouldn't be interested in working out a deal with CBS because "they are tarnished now," fuel was added to the fire online when White was seen sitting close to Leslie Moonves, the president and CEO of CBS Corporation, during game 7 of the NBA Finals last week at the Staples Center in Los Angeles.

That scene appears to be no more than a coincidence, according to sources.