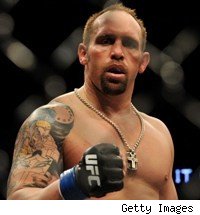 Although Shane Carwin is only making $40,000/$40,000 his upcoming UFC 116 fight -- far less compared to what opponent Brock Lesnar will be earning -- and would have preferred a percentage of the pay-per-view buys that typically benefits UFC superstars, Carwin says he loves to compete and "would have done it for less."

"I won't lie and say I wish I was getting a piece of this PPV," Carwin wrote Monday on his latest blog. "Of course I want that, so does every other fighter on the card that is not. I love to fight but I would love to fight for millions of dollars. Who wouldn't want to be paid millions of dollars for doing what they love (aside from that girl in Twilight)? But, I am not fighting for the money. If I was I would have checked out of this sport LONG ago."

Share Carwin's last fight was at UFC 111 this past March, where he defeated Frank Mir to become the interim UFC heavyweight champion, earning a shot at Lesnar. Since UFC 111 took place in New Jersey, fighter salaries were not made public. In a co-headlining bout one year prior at UFC 96, Carwin was listed as earning $32,000 ($16,000 win bonus included) for his victory over Gabriel Gonzaga.

"This is not the NFL and there is no league minimums," Carwin continued. "You eat what you kill and that is all. I have a great team making sure that I have plenty of game to hunt. I am not dependent upon fighting Brock to cash out. I am making more off of being a fighter than I could ever have imagined. I regularly make calls to my manager thanking him for 'changing my families life.' I have been blessed by MMA, most of the MMA media, the fans, and even the haters and for that I am forever grateful."

As always, the agreed upon purse does not include additional sources of income such as sponsorships and potential bonuses. Carwin is thankful now for his sponsors, but come fight night, the confident heavyweight says he's looking forward to the latter.

"[My purse] is $80,000 ($40 to show and $40 to win) plus you have to factor in my generous sponsors (THANKS) and the KO and Fight of the Night bonus that will be awarded to me on July 3rd," Carwin wrote. "I would have done it for less, I love competing and testing myself."