Nothing More to James Toney's Relationship With M-1 Global 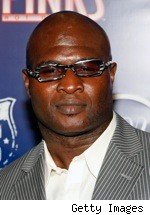 When James Toney signed with the UFC, many long-time fans of the organization, for one reason or another, let out a collective groan.

And now that training footage of Toney has surfaced online branded with the M-1 Global logo, many are wondering what the connection is between Toney and the organization that is best known for not agreeing to a deal with the UFC that would have seen Fedor Emelianenko fight inside the Octagon.

Apparently, though, there isn't much of a connection.

Evgeni Kogan, M-1 Global's director of operations, told MMA Fighting that Toney "is definitely not affiliated with us," while Steven Bash, M-1 USA VP of Legal Affairs, further explained that their relationship is not a business one.

"Toney's trainer is the house trainer at the M-1 Global affiliated gym in L.A. His strength and conditioning coach is the owner of the gym and a good friend of mine," Bash wrote via e-mail.

"There is no direct affiliation between M-1 Global the company and Toney."

Toney is set to make his UFC debut against Randy Couture at UFC 118 on August 28 in Boston. MMA Fighting's Mike Chiappetta has a look at his training camp here.

Watch below as he talks about fighting Couture and then boxing champion David Haye shortly thereafter.