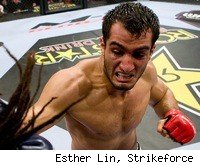 In February, then-Strikeforce light heavyweight champion Gegard Mousasi announced that he had split with M-1 Global. Mousasi even categorized the break-up as "bitter." This led to speculation that Mousasi was setting himself up for a departure to the UFC.

Four months later, Mousasi is no longer the 205-pound champion and, according to Evgeni Kogan, M-1 Global's director of operations, "The Dreamcatcher" appears to be on his way back to M-1.

"We are working very hard to get him back in the fold, so-to-speak. Officially, and I have spoken about this before, he was never under contract with us. He never had an M-1 contract. His relationship with us was based on his relationship with one of the principals of our company, Apy Echteld, who's his manager. So we closely worked with him," Kogan said on Monday's edition of The MMA Hour.

"He's a really great guy. He's a kid. He's, like, 24 or 25 or something. He's someone that we did a lot of work with, we did a lot of stuff for, he did a lot of stuff for us, and then, at some point during the last 5 or 6 months, because of the usual problems that ensued when he spoke out and said that he was leaving us etc. And that was fine, there was no animosity in the split, so-to-speak. His relationship with Apy has continued, and we're now working very hard to get him back into the fold."

Kogan went on to say that while the organization hasn't come to terms with the 28-3-1 fighter, he was confident a deal would be completed sooner rather than later.

"I think I could reasonably, confidently say that at some point [Mousasi will sign with M-1] in the near future, and we'll continue on the little happy family that we were."

Mousasi is scheduled to fight next at DREAM.15 on July 10 in Saitama, Japan, however, no opponent has been officially announced. Kogan said that he was unsure who Mousasi would be facing.

Kogan added that Mousasi was "really broken up" about his April loss to Muhammed Lawal, and has decided to bring in "American-style wrestlers" to work on his ground game.

And despite the fact that the organization is hoping to work with Mousasi again, don't expect M-1 to start signing established stars to long-term contracts any time soon.

(Ed. note: Watch Kogan's appearance on The MMA Hour below)