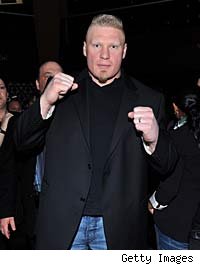 Earlier this week during a Strikeforce conference call, Fedor Emelianenko was asked about the upcoming UFC 116 fight between Brock Lesnar and Shane Carwin, and on Tuesday, the roles were reversed, as the UFC heavyweight title fight combatants were asked about the Russian MMA star.

Because rumblings of Emelianenko's possible retirement have circulated in the last few days, Lesnar and Carwin were asked their opinions on never having the opportunity to face Fedor before he calls it a career.

"Good for Fedor. I hope he does retire. He's the greatest champion of all-time," he said with a laugh. Before anyone could ask him if he was being sarcastic, he made his feelings clear.

"He's the greatest champion ever, of all-time, in his own little world," he said. "Good for him."

The reporter asked Lesnar if he felt he could beat Emelianenko.

Share "Absolutely. I can beat anybody," said Lesnar, who earlier mentioned that he was completely unaware Emelianenko is fighting this Saturday night.

Carwin was not surprisingly, more diplomatic in his response.

"I think it's unfortunate that he didn't join the UFC, but I'm not concerned with anything Fedor's doing right now," he said. "I got Brock ahead of me and that's all I'm focused on. The UFC is the NFL of mixed martial arts. The best of the best."

In another note mildly related to MMA, Lesnar was asked his thoughts on former pro wrestler Dave Batista possibly competing in MMA. Lesnar and Batista both worked for WWE for several years, though Lesnar came to MMA with strong amateur wrestling credentials while Batista has no combat sports experience.

"Get in line, everybody and their dog wants to get into fighting," he said. "Next question. We're talking about a heavyweight championship fight, not some wannabe."