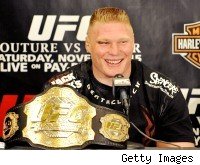 By his mere presence, Brock Lesnar found a way to change the game in the UFC's heavyweight division. A weight class that had previously been big on quickness and/or power striking (think Randy Couture, Andrei Arlovski and Tim Sylvia), suddenly became the domain of mega-heavyweights who cut to make the 265-pound limit and mauled their opponents with strength and wrestling.

But just when you think you know exactly what you're in for with Lesnar, the UFC heavyweight champion has gone and if not reinvented, at least retooled his attack.

Speaking today about his upcoming UFC 116 championship title defense against Shane Carwin following a year away, Lesnar told reporters on a conference call that he'd dropped weight, added a new striking coach and focused heavily on his strength and conditioning.

"When I pulled the pin on this fight last October, I really regrouped and kind of rejuventated myself," he said. "I took a new approach on it as far as training and everything, and it's been very refreshing and I really came leaps and bounds. It's been a great thing. I'm excited to fight."

ShareThe biggest change for the 32-year-old Lesnar was his diet. After suffering from diverticulitis that was so bad it caused him to lose 42 pounds and nearly required a career-threatening surgery, Lesnar brought in strength and conditioning coach Luke Richardson to help him through the process of rebuilding himself.

While Lesnar used to cut down from around 280 during fight week, he said that after his morning workout, he was right at 265 due to a 3200-calorie per day, high-carb, high-protein diet.

"It's a good thing," said Lesnar, who added that the food he misses most is a bowl of Fruity Pebbles cereal at 10 pm. "I feel better, I recover faster. If I wasn't seeing the results I'm seeing, it would be very hard to do."

In addition, Lesnar made some changes to his camp. Though he's still working with the same core group that helped him rise to the top of the UFC heavyweight heap, he added boxing coach Peter Welch, who is best known to MMA fans as the man who re-tooled Kenny Florian's striking game.

Most recently, he brought in his former foe, the legendary Randy Couture, for a five-day stint.

While Lesnar seemed more engaged than usual for a fairly routine set of questions, he characterized himself as "still the same ornery SOB I've always been," and when asked if he saw his relationship with the media changing, he said, "No, I still dislike all of you." Still, it was pretty clear he has a different outlook on life after going through a horrible illness, a time so bad when he said he felt he was "on my death bed."

Lesnar detailed his camp, which in addition to the aforementioned members, featured UFC fighters Chris Tuchscherer and Jon Madsen, Bellator's Cole Konrad and longtime coach Marty Morgan, among others. Despite bouncing back into the championship fray after a year away, Lesnar said he believed ring rust would not be an issue.

"I've had about 40 tuneup fights in the last eight weeks in training camp," he said.

As for his opponent Carwin and the belief that he'll be facing a mirror image of himself come fight night, Lesnar objected.

"I don't agree," he said. "Shane's a big guy and there are a lot of similarities. He's a little better-looking than I am. I'll give that to him, but that's about it."

Later though, he was a little more complimentary, saying, "It's going to be a great fight. Shane poses different things I haven't faced. That's correct. But I've shown a lot of great stuff in a short amount of time. I'm evolving as a fighter every single day, and come July 3, I'll prove that."