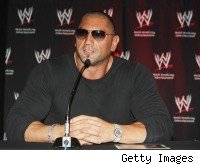 The 41-year-old Batista recently quit pro wrestling after a multi-year tenure in the WWE during which he was one of the organization's most popular performers.

Share Adding to the believability of the rumor, Batista was seen attending last week's Strikeforce event in Los Angeles. In addition, earlier this year, Affliction released a video of him training at their workout center. However, a jump to major MMA seems an unlikely one for him. Though he has reportedly trained a bit in the past, he does not have any martial arts base to draw on as some other late career changers like current UFC champ Brock Lesnar have.

Lesnar, like Batista, was once a big WWE star before transitioning to MMA, though Lesnar was an accomplished amateur wrestler, capturing the NCAA heavyweight championship before trying his hand at pro wrestling.

Batista may have just been fooling around with the TMZ cameras, as evidenced by his reaction when asked if he would fight Russian legend Fedor Emelianenko.