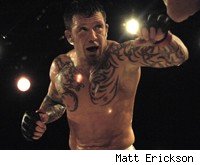 John Kolosci hoped his latest victory would propel him back to another shot with a major promotion, and it appears that it has.

Kolosci, a veteran of Season 6 of "The Ultimate Fighter," told MMA Fighting on Monday he has signed a one-fight deal with Bellator and will face unbeaten Kenny Robertson on the promotion's Aug. 19 card at the Chicago Theatre.

Kolosci (14-6) is coming off the biggest win of his career, a submission of nine-fight UFC veteran Luigi Fioravanti in just 42 seconds. He delivered a strong right that floored Fioravanti early in their main-event welterweight fight at the Hoosier Fight Club 4 show in Gary, Ind., 10 days ago. He then went to the ground, took Fioravanti's back and locked in a rear-naked choke to end the fight.

The win was Kolosci's sixth in his last seven fights – the only blemish being a decision loss to fellow Indiana-based 170-pounder Shamar Bailey on the Strikeforce: Fedor vs. Rogers card in Chicago last November.

Kolosci said Robertson presents some challenges with his submission skills, but believes he has the edge.

"He has wins by armbars, a knee bar, TKOs," Kolosci said. "He's a very tough dude, but I don't believe he's fought anyone my level. I'm looking for a knockout."

Robertson (9-0) has made the rounds in Midwest-based promotions Cage Rage, Corral's Combat Classic, Combat USA and Madtown Throwdown. He was a nationally ranked wrestler at 174 pounds at Eastern Illinois University, which has produced the likes of UFC Hall of Famer Matt Hughes, Mike Russow, Chase Beebe and Clay French.

Kolosci said he hopes a victory in August could get him a crack at a future Bellator welterweight tournament. The winner of Bellator's tournaments gets $100,000 – a significant step up in compared to the regional promotions Kolosci has been building wins on after losing his only UFC fight to Matt Arroyo on the Season 6 TUF finale.

"I plan to make the most of this opportunity," Kolosci said. "I'd love to get in their tourney because winning it pays very well. Plus, I get to build off this last training camp, which was spectacular. I'll be in sick shape for this one."