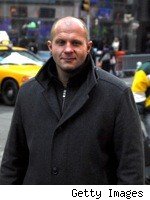 Fedor Emelianenko was a no-show for Monday's episode of "The MMA Hour" with Ariel Helwani, leaving M-1 Global's Director of Operations, Evgeni Kogan, to answer questions in his stead.

Kogan spent much of his time on the show shooting down rumors about M-1 Global's most famous fighter, saying that he did not think Emelianenko was seriously considering retirement and insisting that neither Emelianenko nor M-1 Global is avoiding a fight with Strikeforce champion Alistair Overeem.

"We have no problem with fighting anyone," Kogan told MMA Fighting's Ariel Helwani. "Fedor doesn't choose his opponents. He will fight whoever is put in front of him."

This Saturday night in San Jose that person is Fabricio Werdum, an opponent who Kogan said would make for an "interesting fight," but conceded that it's not exactly the fight fans have been waiting to see.


Kogan, who attempted to explain some of M-1's recent moves by claiming that Fedor is the highest paid fighter in MMA, bristled at the notion that Emelianenko needs to face Brock Lesnar or other UFC heavyweights in order to legitimize his legacy.

"[Emelianenko] is at the top of his sport for 10 years. I think to compare him or say he needs to fight people who have had three or four fights or five fights, I don't think it's doing justice to his career. It's not holding him up in the light that he should be held up in. It's not doing him justice."

When asked whether there's still a chance that Fedor might land in the UFC some day, Kogan said he "wouldn't rule anything out."

As for reports that Emelianenko was hinting at retirement during his latest media call, Kogan said that the top heavyweight may have been simply trying to "keep people guessing a little bit," adding that it was his "personal belief" that a potential political career in Russia would not bring about Emelianenko's departure from the sport at the end of his current contract.

Perhaps the most ironic moment of Kogan's appearance on the show was his remark that M-1 plans to "write our own narrative a little bit more" when it comes to how the company is perceived by fans and in the media.

Of course, this came on the same appearance where M-1's star fighter and shareholder was missing in action. Kogan said he had no idea where Emelianenko might be during this scheduled appearance, but suggested that he could be "at the beach" or "in a movie."

Granted, scheduling mix-ups do happen from time to time, but it's hard to write your own narrative in the media when you can't even get your most valuable asset to show up for media appearances during fight week.