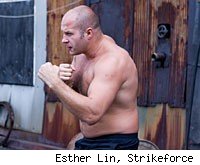 Last year Fedor Emelianenko disappointed a lot of mixed martial arts fans when he turned down a contract offer from the UFC and decided to stick with his own promotion, M-1 Global, and fight on co-promoted cards with Strikeforce. One of the reasons that move seemed so baffling is that the UFC was reportedly offering Fedor an enormous contract that would have made him the highest-paid fighter in the sport.

But according to M-1, Fedor is already the highest-paid fighter in the sport.

Evgeni Kogan, M-1 Global's Director of Operations, said Monday on The MMA Hour that Emelianenko doesn't need to sign with the UFC to be financially secure because makes more money than any other fighter in mixed martial arts right now, through the contracts he's signed with M-1 Global and Strikeforce.

Share Kogan said that throughout Fedor's career, his manager, Vadim Finkelchtein, has protected his interests and made sure he was well compensated for his work. And he said that people who question whether Finkelchtein has made the right moves in guiding Fedor's career don't need to know anything more than that.

"That's all due to the management of Vadim and M-1," Kogan said, "and that's the only answer that's needed."

That all sounds good, but the truth is that M-1 has no idea how much money the UFC pays its top fighters, as the big stars like Brock Lesnar make much more money in pay-per-view bonuses (which aren't disclosed publicly) than they make from their official fight purses (which are disclosed by state athletic commissions). Kogan himself acknowledged after making the claim about Fedor's status as the highest-paid fighter that,"I don't know exactly what the UFC fighters get."

Truthfully, no one knows what anyone makes in this sport: Salary figures are murky, and undisclosed bonuses are commonplace. It's possible that Fedor is the highest-paid fighter in the sport, but it seems unlikely, given the reality that the UFC's revenue dwarfs that of M-1 Global and Strikeforce. Kogan's claim sounds more like spin than like a candid assessmentof Fedor's compensation.