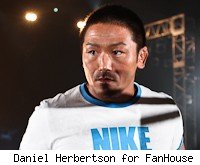 Sengoku Middleweight Champion Jorge Santiago is set to make his second title defense against the man he won the belt against, Kazuo Misaki, at SRC 14 on August 22nd.

Santiago and Misaki first met in January 2009 at the finals of Sengoku's middleweight tournament where Misaki was winning the fight going into the final round with his unorthodox counter striking. Santiago's conditioning allowed him to take control in the final round however and secured a rear naked choke for the tournament victory.

Santiago's first fight following his title victory was a non title affair against Mamed Khalidov where Santiago was knocked out in the first round. Santiago was successful in the rematch for the belt however and won a unanimous decision.

Since losing the tournament to Santiago, Misaki ran through Kazuhiro Nakamura with a flying knee and guillotine that left the judoka a bloody mess but faltered against powerhouse Melvin Manhoef on New Year's Eve, falling to the canvas after a flurry of punches from Manhoef but the bout was called somewhat prematurely as Misaki looked to recover immediately.