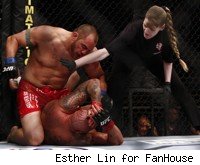 Believing that illegal elbows influenced the outcome of his fight Saturday, UFC heavyweight James McSweeney will look to appeal his loss to Travis Browne at The Ultimate Fighter 11 Finale card in Las Vegas.

McSweeney's manager Lex McMahon told MMAFighting.com Monday that they will file a formal request with the Nevada state athletic commission to have the loss overturned.

"James was doing very well in the fight until he got hit with a totally legal and fair shot by Travis that put him down," McMahon said. "Once Travis got on top of him, he landed several blows that were elbows to the back of the head -- well beyond what the referee came and told us was the acceptable zone, which was anything that was two knuckles past the ear."

In his first fight since beating fellow TUF 10 cast member last December, Sweeney lost Saturday to UFC newcomer Browne by referee stoppage due to unanswered punches at 4:32 of the first round, lowering Sweeney's record one fight under .500.

McMahon, who says the decision to appeal is to allow McSweeney every right to have an accurate record, is hoping that photographic evidence will help prove that Browne missed the mark, legally, on several elbows.

"Those blows that Travis landed, while I certainly don't think they were intentional, certainly were illegal," McMahon said. "We took a photograph of the laceration on the back of James' head and that showed there's no way -- and the doctor that examined James after the fight said, 'This is clearly in an area that is illegal.' So we took a photo of it, went back and watched the film again this morning and coupled with what his corner was telling us, we just felt the right decision was to go ahead and put the record straight. James was defending himself well while he was on the ground, but the illegal elbows changed the course of the fight."

While the Nevada commission has overturned fights in the past, it's a rarity and this one may be too close to call especially since referees are allowed their own judgment call. At the very least, McMahon would like to point out to others through his appeal plan that illegal blows may have made a difference in his client's fight.

McMahon says he has received no indication that McSweeney will be released following the loss and is looking forward to having McSweeney compete at UFC 120, when the UFC returns to the UK on Oct. 16.