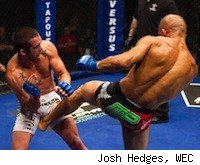 What a weekend. Two Zuffa events in two days, and sandwiched in between two Strikeforce cards on Showtime. It's almost enough to make even the most hardcore fan take a night off to watch some "Top Chef" and wait for the testosterone levels to drop back to normal. Almost.

Rather than try to separate Saturday night's action from Sunday's – personally, the weekend's all one bloody blur for me – let's combine the two for a giant look at the good, the bad, and the staph-infected after the TUF 11 Finale and WEC 49.

Biggest Winner: Court McGee
As I pointed out in the MMA Wrap-Up, only by the magic of Spike TV is beating a relative unknown like Kris McKray an accomplishment worthy of a trophy, but that's not McGee's fault. He opened up and told the MMA world his story of addiction and recovery, and then he did what he had to do in the cage. Even in spite of his beard, he has a ton of new fans this week. He also has a UFC contract. No one can say he doesn't deserve both.

Biggest Loser: Jamie Yager
There's one on almost every season of the show. He talks better than he fights and makes himself a lightning rod for criticism, only to be quickly forgotten when he proves better at self-promotion than self-defense. I'd suggest that all these guys get together and form a reality TV show of their own if only I didn't think it would be too insufferable to sit through.

Most in Need of a Doctor's Appointment: Keith Jardine
It's not enough that he had to fight a guy with a nasty staph infection sprawling across his lower back. No, Jardine also had to lose the fight and a pint of blood all at the same time. This one got so messy that in between rounds the Spike TV cameramen were frantically wiping blood off their lenses, only to have it replaced by more. It's hard not to feel bad for Jardine after a rough night like that. It's also hard not to wonder what's next for the "Dean of Mean" after his fourth straight loss.

Most Improved: Kyle Noke
He looked impressive while dismantling Josh Bryant, and if he'd wanted to he probably could have finished it sooner. The way Noke had Bryant cringing against the fence by the second round, it really made me eager to see him against some more experienced UFC fighters. We don't want to get too excited about him just yet, but he's worth keeping an eye on.

Least Helpful Apology: Kamal Shalorus
It's not that I think he was intentionally kicking Jamie Varner in the bathing suit area, but after the third time, does it even matter whether you meant to do it? I still don't understand how the second groin shot was worthy of a point deduction and the third wasn't. Perhaps the ref thought that Varner's testicles had gone numb by that point, thus minimizing the effect of the foul?

Most Self-Aware in Victory: Chris Leben
If you're waiting for Leben to evolve into a slick technician, you can probably stop right now. Leben knows what kind of fighter he is. He's the guy who throws looping left-handed bombs in between foot stomps. There's no point in trying to change that now.

Least Self-Aware in Defeat: James McSweeney
While I can't guarantee there were no strikes to the back of his head, I can guarantee that McSweeney's career won't benefit from his decision to appeal the loss to Travis Browne. Even the cut on his head that he photographed as "proof" is less than convincing. Maybe it's in the illegal zone, but just barely. Regardless, there's no way he wins this appeal. Instead he just makes himself look like a whiner in the eyes of fans.

Most Fun to Watch: Mark Hominick
When Hominick's on the fight card, you're almost always going to get your money's worth. His victory over Yves Jabouin was the latest effort in a history of entertaining outings by the Canadian. His fighting style is such that I can't necessarily see him becoming WEC champion at any point, but I don't really care. He puts on a show and gives the fans everything he has. There's always a place in MMA for a guy like that.