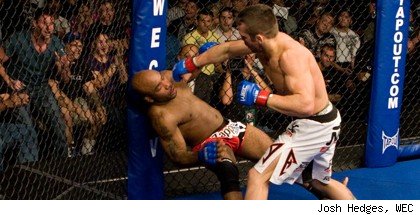 World Extreme Cagefighting is back on Versus Sunday night for the first time in almost four months, with a card that might feel like something of a letdown compared to April's pay-per-view offering, but should nonetheless provide plenty of the fireworks that the WEC consistently offers.

We've got the preview and predictions on the five-fight televised card below.

Predictions on the five televised fights:
Jamie Varner vs. Kamal Shalorus
This fight represents a major step up in competition for Shalorus, an Iranian wrestler who's still basically a novice in mixed martial arts. Varner is the former WEC lightweight champion and will probably get a rematch with the man who took his belt, Ben Henderson, if he beats Shalorus. I think he'll do just that, with his superior striking proving to be too much for Shalorus on the feet.
Pick: Varner

Mark Hominick vs. Yves Jabouin
Jabouin is an explosive striker who got what came out on the wrong end of what I thought was a bad split decision against Rafael Assuncao last year in his WEC debut. Hominick is the more experienced fighter and the favorite, but I like Jabouin to come out on top in this battle of Canadians.
Pick: Jabouin

Josh Grispi vs. LC Davis
The 21-year-old Grispi is a well-rounded fighter who has taken more than a year off since his 2009 victory over Jens Pulver. I like Grispi to get back on track against Davis and keep marching toward a future featherweight title fight against Jose Aldo.
Pick: Grispi

Chris Horodecki vs Danny Downes
Although he's coming off a bad loss to Anthony Njokuani, Horodecki is the biggest favorite of any fighter on the board, and he should handle Downes, who's 6-0 but has never fought anyone with even close to the skill level of Horodecki.
Pick: Horodecki

Eddie Wineland vs. Will Campuzano
Wineland is a former WEC bantamweight champion who has been somewhat overlooked in the division as fighters like Dominick Cruz, Brian Bowles, Miguel Torres and Joseph Benavidez have passed him by. I don't think Wineland is ever going to be on the same level as those guys, but I do think he's superior to Campuzano and should handle him where ever he wants to take the fight.
Pick: Wineland