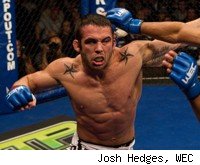 This is the WEC 49 live blog for Jamie Varner vs. Kamal Shalorus, the main event of tonight's WEC card on Versus from the Rexall Place in Edmonton, Alberta, Canada.

Shalorus walks out to "Blame it on the alcohol" by Jamie Foxx. Varner hears the boos as he makes his way towards the cage to Eminem's "Not Afraid."

Round 1: Varner double jabs and sneaks through a straight right. Shalorus lands two leg kicks. Varner misses a big right hand. Varner is looking to land big. Varner counters a leg kick with a combo that ends with a right on Shalorus. Varner counters again off one of Shalorus' frequent leg kicks but Shalorus fires back this time. Shalorus lands an outside, inside and outside leg kick and Varner smiles. Varner lands a straight left. Varner lands a right and Varner ducks down. Varner goes for the finish. Shalorus recomposes throws his own combo and then backs off to stretch his arms out and yell in excitement. Wild. Shalorus grabs a leg, but Varner slips out. Varner lands a left. Shalorus scored on a number of leg kicks, but it was Varner's faster and crisper boxing that will win him the opening round of this main event.

MMAFighting.com scores the first round 10-9 for Varner.

Round 2: Shalorus continues to chop at the legs of Varner. A low blow delays the fight momentarily at 3:42. Varner lands a nice left as Shalorus comes in with a kick. Varner lands with the left hook and straight right. Shalorus lands another low blow at 3:00 and Varner is down in pain. Referee Josh Rosenthal deducts one point away from Shalorus for his second low blow. Shalorus looks like he's going to need a finish for sure now. The clock back on at 2:55. Shalorus stalks Varner with more leg kicks and body kicks. Varner's kick is caught and a right hand stuns Shalorus. Varner lands more but Shalorus backs off once again to raise his arms up to pump up himself and the crowd. Shalorus lands a left hook. Varner slows and circles away for the remainder of the round. Shaolorus unloads on Varner, who covers.

MMAFighting.com scores the round 10--8 for Varner.

Round 3: Shalorus lands another kick below the belt early on and Varner is hurt on his back. Replays show the kick is clearly low. Rosenthal gives Shalorus a small lecture but lets him slide without another point deduction. Varner asks Rosenthal for time and if there was another point deduction. Back on, Varner looks fresher. Shalorus targets kicks towards Varner's body instead of risking another illegal blow. Shalorus catches a leg and quickly takes Varner down for the first time in the fight. Varner is doing a good job preventing Shalorus' attempt at ground and pound. Shalorus has to settle with open palm strikes to the body. Varner with elbows off his back. Varner avoids a punch and sits up for the guillotine. Shalorus escapes towards Varner's halfguard. Varner pushes him off and they are back up with less than half-a-minute remaining. Varner does quick Shalorus impression by raising his hands during the 10-second warning.

MMAFighting.com scores the round 10-9 for Shalorus and the fight 29-27 for Varner.

When Varner returns to his corner he says he broke his hand in the second. Stitch cuts off the tape from Varner's right hand. Before they hear the official decision, Varner and Shalorus share a friendly encounter.