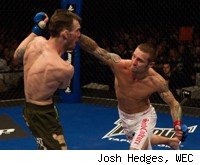 This is the WEC 49 live blog for Eddie Wineland vs. Will Campuzano, a bantamweight bout on tonight's WEC card on Versus from the Rexall Place in Edmonton, Alberta, Canada.

Round 1: Campuzano attacking Wineland's legs early with a couple of hard kicks inside of the first minute. The next time Campuzano tried it, Wineland caught the kick and fired off a straight right that landed. Wineland works into and out of range well as Campuzano works to find his range. Wineland connects with another straight right, this one knocks Campuzano on his backside. Wineland lets him back up as we go under a minute. In an otherwise close round, that could be the difference. Campuzano fires off a head kick that misses. Wineland catches another kick and scores with two rights. MMA Fighting scores the round for Wineland, 10-9.

Round 2: Campuzano continues his lower body attack while Wineland keeps headhunting. The low kicks keep landing for Campuzano, but he's not as effective on his high strikes. As the round goes on Campuzano starts landing, but with about 70 seconds left, Wineland crushes Campuzano with a straight right. Campuzano falls backward and Wineland follows him. He attacks with ground and pound, and Campuzano seemingly takes a walloping but manages to survive and get back to his feet after the ref seemed on the verge of ending it. Moments later Wineland continues the attack, and he hammers Campuzano with a bodyshot that puts him down immediately. He lands one more punch and the ref halts the action.