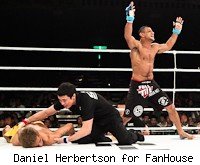 TOKYO -- MMAFighting.com has complete Sengoku 13 results for all the fights happening June 20 from the Ryogoku Kokugikan in Tokyo, Japan.

Full Sengoku 13 results are below.

SRC Featherweight Title Fight
9. Marlon Sandro def. Masanori Kanehara by KO (Punches) - Round 1, 0:38
It took just 38 seconds for Marlon Sandro to take Masanori Kanehara's feathweight belt. The bout started with Sandro immediately seizing control of the center of the ring with the defending champion circling around him, feigning jabs and attempting to gauge the speed difference. This circling did not last long though and as soon as Kanehara moved to the corner, Sandro moved in with a jab that that was blocked, followed by a right straight. The finishing blow, as is becoming the norm for the Nova Uniao black belt, was the right uppercut which landed cleanly and ended Kanehara's night early. A following left hook from Sandro as Kanehara stiffly fell forward to the mat missed but was not needed. Kanehara was stretchered from the ring and did not regain consciousness until back stage and Sandro was awarded the featherweight title.

8. Light-Heavyweight: Hiroshi Izumi def. Chang Seob Lee by TKO (Punches) - Round 1, 4:37
Athens Judo Silver Medalist Hiroshi Izumi found no trouble in Chang Seob Lee as soon as he played to his strengths. On the feet the fight was a flip of the coin, with both men landing sloppy looping punches. Izumi thankfully decided to employ his judo though towards the end of the first and took Lee down in slow motion due to some rope grabbing from the Korean. On the mat, Izumi moved to mount and then back control where he rained down blows to the sides and illegally to the back of the head. The punches when unpunished though, and with 23 seconds left in the round, Samio Kimura decided that Lee had taken enough damage despite Lee signaling otherwise.

7. Welterweight: Yasubey Enomoto def. Sanae Kikuta by TKO (Punches) - Round 1, 3:57
Sanae Kikuta's welterweight debut was spoiled by Yasubey Enomoto in brutal and dominating fashion. The ADCC champion's takedowns were easily avoided by Enomoto with a thai clinch and from the first failed attempt, it was clear that Kikuta was going to have conditioning problems. The Grabaka boss was breathing heavily immediately and lacked any bounce in his step which made work easy for Enomoto. Kicks to the body and an array of punches were on display and Kikuta had no answer other than to constantly circle away. Bloodied and marked up within only minutes, Kikuta took a right hook which sent him to the canvas where Enomoto brought on punches from side back control for the referee stoppage.

6. Lightweight: Maximo Blanco def. Rodrigo Damm by TKO (Punches) - Round 2, 0:45
As is his modus operandi, Maximo Blanco brought the violent TKO win, but it took him a round to get going. Rodrigo Damm represented Blanco's stiffest test to date and under constant and strict instructions from his corner, remained unusually calm through the first round but in the process lost the round. With Blanco not attacking, Damm worked over the Venezuelan's legs with low kicks and kicks to the mid section. As the bell for the second started, Blanco came out more aggressively, leaping at Damm with a non-specific flying kick/knee that missed followed by a swarm of fists that sent Damm down. Sprawled on top of Damm, Blanco hammerfisted away as Damm attempted to sit out but the damage was too much at the referee brought an end to the bout at 45 seconds of round two.

SRC Welterweight GP Series 2010 Block A
5. Keita "K-Taro" Nakamura def. Omar de la Cruz by TKO (Punches) - Round 2, 3:53
Keita "K-Taro" Nakamura returned to form in a dominating win over Bellator tournament finalist Omar de la Cruz. Despite having Brandon Vera in his corner, De la Cruz's gameplan left a lot to be desired, as soon as he encountered any trouble with a takedown or in the clinch, he decided to pull guard. Through the two rounds neither fighter was effective on the feet but as soon as De la Cruz pulled guard or was taken down, he started eating surprisingly powerful ground and pound which showed up as a new tool in the Japanese grappler's toolbox. The damage accumulated through the fight, as did the swelling on De la Cruz's face and with just over a minute to go in the second round and with Nakamura landing cleanly at will now, the referee called a stop to the bout.

SRC Welterweight GP Series 2010 Block A
4. Takuya Wada def. Jae Sun Lee by Split Decision
Takuya Wada barely scraped through with the decision over Jae Sun Lee, but it certainly wasn't a thrilling match. Wada's gameplan essentially involved nullifying the Korean and winning with control rather than effective offense and through three rounds that is exactly what he did. When he wasn't being clinched or taken down, Lee landed some strikes but it wasn't enough to sway two of the judges and he dropped the decision.

With these results from the Welterweight GP Series, Keita "K-Taro" Nakamura and Takuya Wada will be facing each other in the next stage.

3. Featherweight: Shigeki Osawa def. Katsuya Toida by DQ (Kicks to the Groin) - Round 3, 1:35
Sengoku Training player Shigeki Osawa was the victor in an unfortunate match with the eccentric Katsuya Toida. Neither fighter was dominating the fight but Osawa was winning with his wrestling until an unfortunate strike to the ground in round two brought Osawa to his knees prompting a long recovery period. Between rounds Osawa was vomiting into a bucket due to the damage from the blow. Round three got underway after Osawa recovered but a knee to the solar plexus which looked good sent the wrestler again writhing in agony on the mat. Upon inspection on the replay, Toida's shin followed through with the knee and struck the cup of Osawa which left him unable to continue. Despite it clearly be an accidental foul, Osawa was awarded the disqualification win.