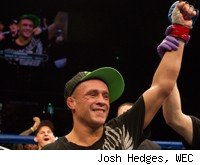 Mark Hominick and Yves Jabouin engaged in a highly entertaining fight Sunday night at WEC 49 that ended up with Hominick beating Jabouin by second-round TKO and both Canadian fighters getting a loud ovation from the fans in Edmonton for a bout that was one of the most exciting of the year.

"This was the most emotional fight I've ever been in," Hominick said afterward. "It's Father's Day. I lost my dad just over four years ago, so it's very emotional."

Jabouin is known as an active, creative, fast-paced striker, and that's what he was in the first round, throwing spinning back fists and spinning back kicks and lots and lots of combinations. But perhaps more importantly, Jabouin was also landing jabs and leg kicks and not just flailing around for knockout strikes as he has at times in the past. He wasn't just active, he was effective in a very impressive first round.

Hominick landed a huge left hand to the body in the second round that caused Jabouin to crumple to the canvas, and it looked like Hominick was close to finishing Jabouin. But incredibly, Jabouin got up and landed a hook to Hominick's chin that left Hominick flat on his back. Jabouin pounced on top of Hominick on the ground, but then it was Hominick who showed the superior jiu jitsu, mounting Jabouin and raining punches down on him until the referee stopped the fight with a minute and a half left in the round.

In a fight that was almost all about striking, it was Hominick's superior grappling -- the ability to roll over and mount Jabouin -- that won him the fight. Now Hominick wants a shot at the featherweight champion, Jose Aldo.

The truth is, Aldo is a uniquely talented fighter, and Hominck wouldn't stand much of a chance against the champion. But he fought like a champ on Sunday night.