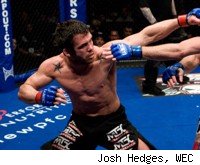 One of the best mixed martial arts cards of the year ended in an unsatisfying way Sunday night in Edmonton, as Kamal Shalorus fought Jamie Varner to a draw at WEC 49.

The fight was plagued by low blows on the part of Shalorus, who kicked Varner in the groin three different times. On one of those low blows Shalorus got a point deducted, and that point proved critical on the judges' scorecards. One judge scored the fight for Shalorus 29-27, one scored it for Varner 29-27, and one scored it even, 28-28.

"I swear, I'm not like that," Shalorus said afterward, referring to the low blows. "I'm a warrior. I don't cheat. It was just an accident. I tried to low kick his knee."

Varner didn't blame Shalorus for the low blows, which he conceded were accidental, but did blame the judges for the decision.

"I think that was bogus," Varner said. "I definitely feel I won the fight."

In the early going Shalorus landed some leg kicks, but when they exchanged punches, Varner's shots were straighter and more direct and were therefore landing before Shalorus got a chance to finish off the looping hooks he was throwing. The two basically spent the entire first round standing in front of each other trading punches, and although Shalorus held his own, Varner was the more effective striker and won the first round.

Once he had recovered from the second low blow, Varner landed a couple of big shots to Shalorus's head, staggering Shalorus but not managing to knock him down. But Varner also began to show signs that Shalorus's leg kicks were affecting him: Varner was hobbling around the cage and looking like those knees Shalorus had been kicking were in pain, and Varner's right hand appeared to be injured as well.

Early in the third round, Shalorus landed yet another kick to Varner's groin, sending Varner sprawling to the ground in agony. Surprisingly, the referee decided not to deduct a point from Shalorus for the third low blow. If he had, Varner would have won the decision.

After a break Varner kept on fighting, and that's when Shalorus finally started to use his Olympic-level wrestling to take Varner down and get on top of him on the ground. But Varner did a very nice job of tying Shalorus up on the ground, getting back to his feet and surviving the third round.

After the fight Varner was in a lot of pain because of both the groin shots and an apparent broken hand, and he yelled several F-bombs live on Versus TV -- and that was before he found out that he'd have to settle for a draw.