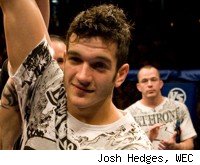 Josh Grispi is back, and he's better than ever.

Grispi, one of the rising stars of the featherweight division in mixed martial arts, returned to the cage after a year off and choked out LC Davis in the first round of their fight at WEC 49 on Saturday night.

Grispi is a huge featherweight and took advantage of his reach in the early going, landing several kicks while out of Davis's range. Davis knew that Grispi was controlling him in the stand-up and that he needed to change something, and so he used his superior strength and wrestling to pick Grispi down and slam him to the ground.

But Grispi was too good: He calmly pulled Davis into his guard, sunk in a guillotine choke, and squeezed until Davis was unconscious and the referee had to stop the fight. The official time was 2:33 of the first round.

The 21-year-old Grispi is now 14-1 in his MMA career. A featherweight title fight can't be far off, and when asked after the fight if he's ready for featherweight champion Jose Aldo, Grispi didn't hesitate.

"For sure," Grispi said. "I'm ready to test my skills against anyone."