Eddie Wineland Finishes Will Campuzano With a Body Shot 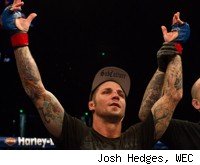 Eddie Wineland put on a striking clinic Sunday night at WEC 49, beating Will Campuzano by second-round TKO and using a punch to the body to finish the fight.

It was a great display by Wineland, the former WEC bantamweight champion who's now on a three-fight winning streak and might not be far from another shot at the belt.


On a couple of occasions in the first round, Wineland caught Campuzano kicks with his left hand and hit Campuzano hard with his right, and throughout the round he was generally the more effective striker, although Campuzano did connect with Wineland's head on one hard kick in a fast-paced first round.

In the second round Campuzano started to throw more punch combinations, but Wineland's head movement was outstanding as he dodged those punches, and then with just over a minute left in the second, Wineland rocked Campuzano with a huge right hand of his own. From there Wineland went to town, landing punch after punch after punch to Campuzano's head, while Campuzano showed a great deal of heart just to survive.

Eventually, as the two stood toe-to-toe against the cage and Wineland battered Campuzano's head, Wineland got the bright idea to go to Campuzano's body, and that's what did it: One hard punch to the gut dropped Campuzano, and the referee stepped in and stopped the fight.