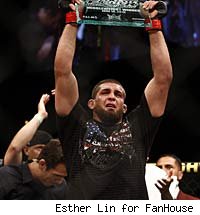 LAS VEGAS -- If there's one thing I've learned from watching all those Wes Anderson movies, it's that people love a good redemption plot. Maybe that explains why Court McGee's story is so endlessly compelling for the fans and the media.

For those who somehow haven't heard it yet, the condensed version goes something like this: McGee was addicted to drugs and alcohol, overdosed on heroin and was declared legally dead, got clean and sober and became an upstanding family man, then won season 11 of "The Ultimate Fighter" with a submission victory over Kris McCray at Saturday night's finale.

Pardon me for dwelling on it, but that's some Greek myth, journey-through-the-underworld type stuff right there.

McGee told his tale of woe and recovery over and over again this week, and he did so with a clinical stoicism that almost made him sound like it was someone else's nearly destroyed life he was talking about. That is, until he took a moment to reflect on his win in the post-fight interview, and the emotion finally overcame him all at once, making his voice quiver before the Spike TV audience.

"When I broke up like that, that's seven years all in one minute," McGee explained in the press conference afterwards. "I dedicate that fight to anyone who's struggling tonight."


Share
In the Hollywood version of this story, here's where the credits would roll. In real life, it's just the end of one phase and the beginning of another.

Now that McGee's a TUF winner, he faces the same challenge that his forebears have. He's got the hype and the big name due to the widespread visibility of the reality show, but he's also got a bulls-eye on his back.

The quickest way for a relative unknown to make a name for himself in the UFC is to beat a brand new TUF champion, and while the UFC tends to take it easy on them from a matchmaking perspective at first, eventually they all have to jump in and swim with the sharks. History tells us that success in the UFC is just as hard to come by for TUF winners as it is for anybody else.

Consider that of the sixteen fighters who have held the distinction before McGee, only three have gone on to become UFC champions, and none of them successfully defended the belt even once. Five of the former winners are coming off losses in their most recent UFC bouts, and one (Travis Lutter) was dropped from the UFC after losing two straight following his TUF win.

I don't point this out to depress McGee's fans or turn the lights out on his victory party, but rather to put the achievement in some kind of perspective. Winning the tournament is a little like becoming the valedictorian of your high school class. It's nice to have on your resume, and people will remember you for it, but it doesn't mean you can't crash and burn right along with the jokers who just barely squeaked by for a diploma.

It's easy for us to look at McGee's story and conclude that he's a fighter of destiny. That fits right along with this easy narrative, all that rising up out of the ashes stuff that we all love so much.

But the truth is that there's no safe harbor in this business. The hungry jackals populating the UFC's middleweight division, they don't care how inspiring McGee's story is. To them, he's just a guy they all want a crack at. He's somebody you can make a name off of, at least if you can be the first one to beat him.

That's not such terrible news, and quite honestly you could do a lot worse than to be Court McGee tonight. You could be Jamie Yager, for instance, sitting around your hotel room and wondering if your fame timer just hit the fifteen-minute mark. Or you could be any of the other contestants from season 11 who got a free ticket to the fights and couple requests for autographs, but very little else that they can take home with them after the weekend is over.

At least McGee has a good problem. He's the guy to beat. He's the guy with the story every writer wants to tell and every fan wants to hear. He's right to savor that, and no one can blame him for it. But in this sport, you're never more than a couple losses away from having your inspiring story turn into a hard-luck tale.