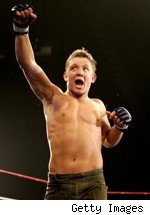 This was the Chris Horodecki WEC fans were hoping to see.

Horodecki, the talented 22-year-old who lost his WEC debut in December, submitted Danny Downes in the second round of their fight at WEC 49 Sunday night, putting on a very good show and demonstrating why so many people in the MMA business believe he has the ability to be a future champion.


"Danny is super tough," Horodecki said afterward. "He's a tough, tough Irish kid. My hat's off to him."

Horodecki controlled the first round on the ground, but Downes at least deserves credit for surviving, including looking very poised and relaxed when Horodecki sunk in a guillotine choke that he was eventually forced to release. It wasn't a good first round for Downes, but it was better thanexpected.

Early in the second Horodecki landed a 1-2 punch combination straight to Downes' face, and then he started getting creative with spinning back kicks and such. As the round wore on, Horodecki had no trouble at all landing whatever strikes he wanted to throw, and Downes looked seriously outclassed.

In the third Horodecki and Downes both came out like they were fired out of a cannon, as though neither one of them wanted the fight to go to a decision. Downes was actually the one who went for a throw first, but Horodecki shrugged him off and then took Downes down, getting him into side control, getting his back and eventually getting him to tap with a rear-naked choke.

The Canadian Horodecki got a loud ovation from the fans in Edmonton, and he deserved it: He put on a great show.