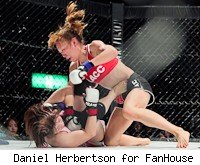 Yasuko Tamada was only able to secure one win in her first seven appearances in the ring. Since then, the Megumi Fujii trained flyweight has picked up ten victories without suffering defeat and tonight picked up the Valkyrie Flyweight Title with a win over Naoko Omuro at Valkyrie 6 in Differ Ariake in Tokyo.

Also one the card, Rin Nakai remained undefeated in seven outings and cemented her place among the top 135 pound women in the world with a solid decision win over 36 fight veteran Megumi Yabushita.

Full results and a breakdown of the fights below. Yasuko Tamada dominated Naoko Omuro in their rematch to be crowned the first Valkyrie Flyweight (100 lb) Champion. Through three rounds, Tamada secured double legs, trips and body lock takedowns and on the mat controlled the fight positionally, landing strikes along the way along with coming close to finishing multiple times with armbars, head-arm chokes and rear naked chokes. Omuro made it through to the closing bell but easily lost a unanimous judges decision.

Rin Nakai moved to 7-0 with her unanimous decision win over a much more experienced Megumi Yabushita. The first round was dictated by Nakai's overhand right which she landed at will but Yabushita's chin was up to the task. As Yabushita relaised that it was a bad idea to stand and trade with Nakai, she attempted to bring the fight to the mat in the second and third rounds but Nakai was also dominant there, controlling and punching from side control. Some unorthodox submission attempts and a pinwheel kick from Yabushita was not enough to make this competitive and Nakai was handed the unanimous decision.

With Nakai's strength, ground technique and athleticism she has the potential to be a legitamte contender on an international level but her striking, aside from her right, lacks polish at this point in time.

Ayame Miura moved to 2-0 and was impressive in her unanimous decision win over Mutsumi Kasai, hounding her opponent from the opening bell with takedowns and ground and pound. Despite a rally from Kasai in the second round, Ayame came home strong in the final round, coming close to getting the referee stoppage with ground and pound before the closing bell sounded.

Megumi Morioka was outclassed by Naho "Sugi Rock" Sugiyama, Moioka clearly having trouble finding her range throughout the fight and missing by a matter of feet with most of her strikes. In the second round a failed takedown attempt by Morioka was easily reversed by Sugiroke leading to her getting back mount and pounding for the referee stoppage at 2:20.