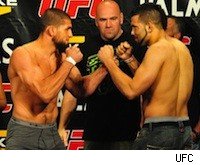 LAS VEGAS -- This is the TUF 11 live blog for Court McGee vs. Kris McCray, the main event of tonight's live finale from the Palms Casino Resort.

McGee and McCray will face off in the middleweight finals for a six-figure UFC contract.

Round 1: They step right into a punching exchange and McGee clinches. After separating they trade two-punch combos and McKray looks for a takedown. McGee defends and then puts McKray on his back. He looks to pass, but McKray works back to his feet, only to be taken right back down by a single-leg. McGee takes a step back and wings a right hand through McKray's defenses before moving into half-guard. McKray gets back up and lets his hands go, but McGee clinches again and eventually gets the takedown. McKray rolls him over and gets back to his feet. A straight right from McGee in the final minute is the most significant strike of the bout so far. The horn sounds to end a very close first round. MMA Fighting scores it 10-9 for McGee.

Round 2: McKray comes right out with a four-punch combo, but almost none of them land. McGee gets the clinch again and take McKray to the mount, quickly moving into full mount. McGee looks for an arm triangle, but McKray defends well and forces him to abandon it. McKray attempts to roll out of the mount and he nearly gives up his back, but escapes to his feet. McGee doesn't let it stay there long before finishing another successful takedown attempt. McGee takes McKray's back with one hook in and sinks the rear naked choke. It's in deep and McKray is forced to tap. Court McGee is your newest Ultimate Fighter winner.