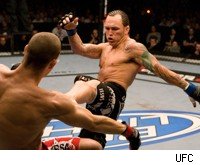 LAS VEGAS -- This is the TUF 11 live blog for Chris Leben vs. Aaron Simpson, a middleweight bout on tonight's live finale from the Palms Casino Resort.

Leben defeated Jay Silva in January and will look to make it back-to-back against the undefeated Simpson.

Round 1: Simpson claims the center of the cage and Leben circles around, landing an inside leg kick. Simpson is willing to exchange only so much and then he moves in for the clinch and picks Leben up for a big slam. Leben works back to his feet and presses Simpson against the fence while working body shots. As always, the foot stomp is a staple of Leben's clinch game. Another takedown from Simpson, but Leben gets up again. A third takedown is stuffed, and they exchange punches in close with Simpson jacking Leben in the jaw with a good right. Simpson is working for one last takedown in the final thirty seconds, but he can't finish it before the horn. MMA Fighting scores the round 10-9 for Simpson.

Round 2: A knee to the body by Leben followed by a hard left backs Simpson up, but Leben doesn't follow up. Simpson squares off with him and bangs a right in close before going for the body lock. Leben fights it off and then back Simpson against the cage, unleashing a series of left hands while holding Simpson by the back of the neck. Simpson looks wobbly, but he holds on in the clinch and recovers. Leben comes forward with more heavy lefts and Simpson tries to duck under for a clinch, but Leben avoids being taken down. Simpson is starting to look a little tired, and Leben smells blood. A big left from Leben thumps Simpson on the jaw. Another left staggers Simpson and he goes face first on the mat. Leben adds more punches on the mat, but Simpson struggles to his feet while eating more shots. A right and a left from Leben sends Simpson staggering off to the other side of the cage, where he collapses. The ref has seen enough, and waves it off.