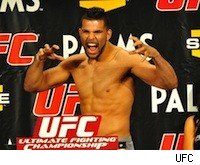 If, like me, you're in Las Vegas for tonight's TUF 11 Finale, you have no shortage of gambling options. From the video slots that no one, least of all those playing, seem to actually enjoy, to the crowded craps tables where someone will always shout 'Come on, seven!' presumably just because they want to replicate the experience they've seen on TV, it's a carnival of different ways to lose some money.

But if you really want a thrill, try looking to a fight card populated with fighters on the way up and fighters on the way down. The exciting part is, it's hard to know at first glance which ones are which. Below, let's take a look at some of the betting odds for tonight's finale of season 11 of "The Ultimate Fighter."

Court McGee (-185) vs. Kris McCray (+155)
If you favor the more well-rounded fighter in any close match-up, and most thinking people usually do, then you have to go with McGee. McKray's success on "The Ultimate Fighter" was based on putting opponents on their backs and keeping them there. It seems unlikely that he'll be able to do that for three rounds against McGee.

My pick: McGee. As an almost 2-1 favorite, it doesn't make a lot of sense to bet on him, but he seems like he's got the tools to be the next Ultimate Fighter.

Matt Hamill (-145) vs. Keith Jardine (+115)
Jardine is riding a three-fight losing streak, including two straight knockouts. Hamill, at least technically, is on a three-fight winning streak, even if he didn't look so triumphant on his way out of the cage after a DQ win over Jon Jones. If Hamill decides to rely on his wrestling against Jardine, who's takedown defense might be the only skill of his that hasn't atrophied lately, it could be a rough night. If he attacks Jardine's chin instead, he'd better have an answer for "The Dean of Mean's" punishing leg and body kicks.

My pick: Hamill. He has a decent chance of catching Jardine and knocking him out, whereas Jardine's best hope seems to be to pick away at Hamill en route to a decision.

Chris Leben (+275) vs. Aaron Simpson (-350)
If this were a grappling match, it wouldn't even be fair. But this is MMA, where every round starts on the feet and every punch with four-ounce gloves has the ability to turn your lights out. After Simpson was nearly KO'd by Tom Lawlor in his last fight, it's not at all unreasonable to think that the heavy-handed Leben could turn this into a brawl and land that one big shot. Then again, it's also not too far-fetched to think Simpson will put "The Crippler" on his back and keep him there.

My pick: Leben. He's the best big underdog pick on this card, and if he can keep the fight standing I like his chances. And yes, I realize that's a pretty big if, but you have to take a chance sometimes.

Spencer Fisher (-175) vs. Dennis Siver (+145)
Despite his experience in the Octagon, Siver continues to fly under the radar, despite the vast improvements he's made over the years. He didn't look great against Ross Pearson in his last fight, but his toughness certainly showed through. Fisher is also a savvy vet with no glaring weaknesses. On paper, at least, this looks like it could be a sleeper pick for Fight of the Night.

My pick: Siver. It's a bit of a risk, but I can see him coming out hard and overwhelming Fisher in the first round. I just wouldn't wager too heavily on it.

Jamie Yager (-120) vs. Rich Attonito (-110)
For the the first minute or two of a fight, before he's suffered any damage, Yager's a dangerous guy. But if Attonito can take him down and grind away at him a little while, Yager seems like a guy who can be mentally broken. We still haven't seen enough of either fighter to know too much for sure, but Attonito's got the edge in experience, which might make all the difference.

My pick: Attonito. If he makes it through the first half of the first round with his equilibrium still intact, his chances get exponentially better with every passing minute.