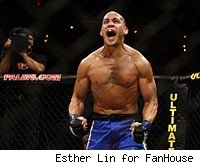 After getting off to a slow start in the first round, Attonito battered Yager relentlessly in the second in winning an impressive technical knockout victory.

Yager is the better striker of the two and Attonito is the better grappler, so it was no surprise that Yager wanted to keep the fight standing while Attonito wanted to take the fight down. What was surprising early on was how much more effective Yager was at implementing his game plan than Attonito. Yager got in and out without any trouble, and when Attonito did briefly get Yager down, he wasn't able to do anything before Yager got back up.

In the second round, however, Yager's conditioning -- or lack thereof -- appeared to come into play. Yager looked tired and was dropping his hands, and that allowed Attonito to land some punches. With a minute and a half left in the third round, Attonito got Yager down, took his back and was close to sinking in a rear-naked choke. When Yager defended that, Attonito simply started pounding away at Yager's head, and Yager had no answer. Eventually referee Steve Mazagatti had to step in to stop the fight.

Yager was given a spot on the main card not because he earned it with his fighting, but because his antics in the Ultimate Fighter house made him the villain of this season of the UFC's reality show. If that helps the UFC and Spike TV get viewers, fine. But fans lose interest quickly if fighters aren't as tough in the cage as they act outside it, and Yager, whose professional MMA record is just 2-2, just isn't good enough to fight in the UFC.