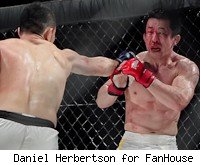 Olympic Silver Medalist Katsuhiko Nagata has expressed a desire to return to the larger stages of MMA but it looks like his lack of tools and paper-thin skin may betray him.

In his unanimous decision loss to former two time interim Welterweight King of Pancrase Katsuya Inoue at Cage Force 17 in Differ Ariake, he was again cut open and out struck after controlling but not winning the majority of the fight.

Full results and a breakdown of the fights below.
Nagata controlled the first two rounds but failed to win them. In both rounds Nagata crushed Inoue against the cage in the clinch but there he was unable to do anything other than ineffective knees to the thigh. A pattern of clinch-hold-break with a few stalemates on the mat resulted in a warning for action to both fighters but still Nagata was not able to cause any damage.

By the third round, Inoue realized that he was in no real danger of being hurt by Nagata and came out clearly trying to finish, battering Nagata with punches while completely lowering his guard. Within moments of Inoue starting to land on Nagata, cuts started to open up on the wrestler's face around the eyes and cheeks, causing heavy bleeding.

After two rounds of no action and the third round going completely in Katsuya Inoue's favor, he took the unanimous decision. Heavy bleeding is starting to become a regular fixture in Nagata's fights, most notably in his TKO loss via a cut to Vitor Riberio at DREAM.8 after getting hit with a single knee.

A step up in competition may have left Koji Ando's record in tatters initially but it looks like he is finally used to this new level. His opponent, Hiroki Nagaoka had 31 more fights under his belt but that experience wasn't enough to enable Nagaoka to break out of a losing game plan half way through the fight.

Both fighters fought southpaw but that was where the similarities ended. It was a boxer vs. slugger match, with Nagaoka sending winging lefts at Ando which where easily evaded and answered with crisp, straight counter punches. Ando established his jab immediately and used it to control the first round. Unwilling to take the fight to the mat in the second and third rounds, Nagaoka was unable to find an answer on the feet other than "punch harder". His attempts to bring Ando into a brawl were fruitless and by the end of the match Nagaoka was bleeding heavily from his mouth after three rounds of constant jabs, hooks and straight punches which were landing at an alarmingly high rate.

All three judges had no difficulty in awarding Ando the much needed win.

Satoshi Nishino looked like he might have a chance to break his four fight losing streak after a solid first round against "Runki". With the standup about even, Nishino forced a takedown off the cage and held on to his opponent and while not able to land any effective ground and pound secured the round. on the judges cards.

His luck round out in the second though when a second takedown attempt was reversed after Nishinio started to lose the exchanges on the feet. With Runki now in the top position he put on an elbow and ground and pound clinic the likes of which is rarely seen in Japan. The elbows from guard, half-guard and side control completely sapped Nishino of the will to fight and from midway through the second round he was a defeated fighter.

The actual defeat didnt come until two seconds before the final bell when the referee decided that he had seen enough.

Runki improved to 5-1 with his only loss coming to the much more experienced Wataru Takahashi.

Naoto Miyazaki's karate styled front kicks to the body gave Asato Hashimoto no choice other than to take the fight to the ground. On the mat though, Hashimoto found no more success, under threat multiple times with arm in guillotines but was still able to nullify most of Miyazaki's attacks.

The fight was still up for grabs in the third round until Hashimoto tired and got caught in an rear-naked choke that would have been the end of him if he weren't saved by the bell. One judge saw it a draw but Miyazaki still managed to get the favor of the other two officials to come away with the majority decision.

The difference between Masahito Hisataka and "Ryo AKB" was clear from the onset as the southpaw, Ryo looped his overhands lefts that were easily evaded and countered with straight rights from Hishitaka. After realizing that he was fighting a losing battle on the feet, Ryo's attempts to then take the fight to the canvas were sprawled on and so Hisataka was easily able to secure the unanmous decision after three rounds

In the opening fight "Shota" came out like a bull from the gates and looked to have Kosuke Terashima in trouble with his striking and ground and pound until Shota managed to get himself caught in a triangle choke at 2:35 of the first round.