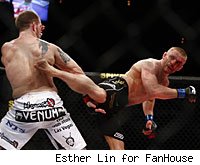 In a tough fight that ended with many fans booing the decision, Dennis Siver defeated Spencer Fisher Saturday at the Ultimate Fighter Finale.

Siver won 30-27, 29-28 and 29-28 on the judges' scorecards, but it was a very close fight that easily could have ended with Fisher getting his hand raised.

Siver is a striker who likes using kicks from unusual angles, and he landed a great front kick to Fisher's face early in the first round, and his stand-up looked good. But Siver also got a big cut over his left eye when he and Fisher accidentally clashed heads, and he appeared to slow down after that.

Fisher started throwing head kicks in the second round and appeared to be building momentum, but Siver leveled Fisher with a hard right hand that turned things back to his advantage. By the end of the second both fighters were looking a little tired, but they didn't stop throwing every punch and kick in the book.

As both fighters continued to look tired in the third, it was Fisher who was showing off better technique, landing precise punches and moving his head to avoid the punches coming from Siver. But while Fisher seemed to be getting stronger as the fight went on, it wasn't enough to impress the judges. Siver improved to 16-7 while Fisher fell to 23-6.