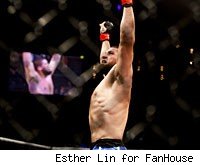 Court McGee is the Season 11 winner of The Ultimate Fighter.

McGee submitted Kris McCray in the second round of their bout at Saturday night's Ultimate Fighter Finale, winning the Ultimate Fighter title and the UFC contract that goes with it, a contract that in reality goes not only to the winner but also to several other fighters on each season of the UFC's popular reality show.


McGee showed off excellent wrestling in taking McCray down in their fight, and he finished the fight by sinking in a rear-naked choke midway through the second round that forced McCray to tap. But he said immediately following the fight that he actually was hoping to win the fight standing up.


Share
"The game plan was to hit him and move, hit him and move and keep him from taking me down," McGee said afterward. "But the shot was open and I took it. Sometimes you just feel it when you're in the cage. I felt it."

An emotional McGee, who has detailed how MMA helped him win his battle with drug addiction, broke down crying in the cage as he said after the fight that he wanted to dedicate the fight to people who are struggling in their own lives. McGee has talked about how he almost died of a drug overdose and how he wants to use his position as a professional mixed martial artist to help others who are in the position he was in. Winning The Ultimate Fighter gives him a big platform to do that.