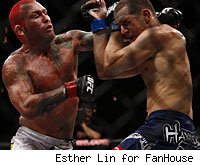 In a big upset that derailed a promising prospect and showed that a UFC veteran still has something left, Chris Leben knocked out Aaron Simpson Saturday at the Ultimate Fighter Finale.

The result comes as a big surprise, as Simpson (who entered the fight with a 7-0 record) had been steadily climbing the ranks of the middleweight division, while Leben (who entered with a 19-6 record) had won only once in the last two years.

Simpson was an excellent college wrestler, and he didn't waste any time doing exactly what he wanted to do, picking Leben up and slamming him onto the ground early in the first round. Leben did a fairly good job on the ground with Simpson and managed to keep the fight standing for most of the first, but Simpson was overpowering Leben and landing much harder punches in the opening five minutes.

In the second round, however, Leben was able to turn the fight into less of a wrestling match and more of a brawl, and that was to his advantage. Leben landed a flurry of punches early in the second, and Simpson just stood in front of him and took it. Leben just kept on landing punches and Simpson just kept on taking them, and eventually Leben landed one too many, sending Simpson flying across the Octagon and forcing the referee to stop the fight.

"He's definitely a better wrestler than me," Leben said afterward. "I knew that going into the fight. I knew I had to stay away from wrestling with this guy. He was taking me down and did a great job there. In the second round I felt him start to get tired in the stand up."

Leben will never be a UFC champion, but he's got some good fights left in him. Already 2-0 in 2010, this is shaping up to be a very good year for Chris Leben.