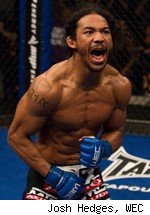 Sunday's main event between lightweights Jamie Varner and Kamal Shalorus at WEC 49 isn't a title fight, but it will have title implications.

WEC general manager Reed Harris said on a media call Tuesday that the winner will get the next crack at current champion Ben Henderson. Varner, a former WEC lightweight champ, has been down that road before. Henderson caught him in a guillotine at WEC 46 in January to unify his interim title with Varner's belt.

And while Varner said he's not overlooking Shalorus on Sunday, it's clear his eyes are on a chance at redemption against Henderson, whom he was critical of for his stance of not wanting rematches after he's beaten someone.

"See the thing is, he doesn't have that decision-making power (to turn down a rematch)," Varner said Tuesday. "I think Ben knows – I think it's a little bit of fear, to be honest with you."

But Henderson defended his position on rematches to MMA Fighting on Thursday.

"If the WEC does decide that my next opponent has earned a shot, whether it's a rematch or not a rematch, whatever. It doesn't matter," Henderson said.

Henderson beat Donald Cerrone in a close decision at WEC 43 last fall to win the interim lightweight title, which was up for grabs while Varner healed from a broken hand. Then beat him again at WEC 48, but more decisively with a first-round guillotine. If Varner beats Shalorus on Sunday, he'll have another rematch on his hands.

"Am I super-interested in doing rematches? Am I going to fight the same three or four guys I've fought before and rematch all of them, or am I going to fight them 10 or 15 times?" Henderson asked. "No, I'm not interested in that. If I finish a guy, if I end it and they tap, then do I want to fight them again? No. That's not very smart on my behalf to fight another guy and another guy and another guy that I've already beaten. If I go to a decision with a guy, then sure – I understand if it's a somewhat controversial decision or whatever."

Varner said personal issues got in the way of his title unification bout with Henderson.

"I had a lot of personal things going on in my life," Varner said. "And I don't want to use them as excuses. But I mean, just to give you one example, my mom was diagnosed with cervical cancer a few months before my fight with Ben Henderson. ... And so that was kind of rough to deal with. Between that and just other things going on, it was really hard on me. So my training, I just wasn't able to focus as much. That Ben fight, I had accepted losing before I'd even lost."

But Varner was also critical of Henderson on the call, implying the guillotine Henderson caught him in to end their first fight was the equivalent of a lucky knockout punch.

"'Ben, he's a good guy, but some of the stuff he says, I don't know man – I think (he thinks) he's a little bit better than he is," Varner said. "I just really felt like that guy hit the lottery when he got me in that guillotine, to be honest with you. No matter what happens, I just hope I get another shot because the kid always tries to claim like he's from Arizona ... He tries to claim like he's from my home state, and the kid's from Washington. It's just funny."

Henderson dodged any trash talking before a potential fight was even set.

"Jamie Varner's entitled to his own opinion," Henderson said. "I'm not going to try to change anyone's opinion. It is what it is."

But there's no doubt Henderson will be watching Sunday's main event intently, knowing the winner is next up for him.

"It should be a good fight, it should be really exciting," Henderson said. "Those guys are gonna definitely put on a show. It should be entertaining. Kamal brings a lot of interesting good things to the table. What he's good at, he's really good at. But he definitely has some holes in his game. He's newer to the sport than Jamie Varner is. Jamie Varner is a little bit more well-rounded. It's an interesting matchup and I can't wait to see what the gameplan is going to be."

WEC 49, the promotion's debut in Canada, takes place Sunday in Edmonton, Alberta. The main card airs live on Versus at 9 p.m. Eastern.