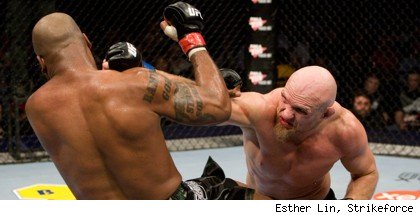 The 11th season of the UFC's reality show comes to an end on Saturday night with the Ultimate Fighter Finale, featuring Court McGee vs. Kris McCray for the "Ultimate Fighter" title and Matt Hamill vs. Keith Jardine in the bout that should be the best of the night. We've got the preview and predictions below.

What: The Ultimate Fighter 11 Finale

Predictions on the five televised fights:
Court McGee vs. Kris McCray
For those of us who watched the full season of The Ultimate Fighter, McGee and McCray in the Finale feels a little strange because we've already seen both of them lose. But give them both credit for making the most of their second chances and advancing to the Finale, even if I don't sense the kind of excitement surrounding either one of them that I usually sense from UFC fans around Ultimate Fighter Finale time. McCray's official MMA record is 5-0 (the fights on The Ultimate Fighter are considered exhibitions) and I think he'll remain "undefeated" by winning a decision.
Pick: McCray

Matt Hamill vs. Keith Jardine
This is a great piece of matchmaking by Joe Silva, with a couple of former Ultimate Fighter cast members looking to bounce back from disappointing recent showings. Jardine has now lost three in a row, and not many UFC fighters keep their jobs after losing four in a row, but I expect him to win a decision against Hamill.
Pick: Jardine

Spencer Fisher vs. Dennis Siver
At first glance this might look like the kind of fight where they stand in front of each other and trade punches for 15 minutes. That's certainly what Siver would like to do, and Fisher isn't opposed to that kind of fight either. But I actually like Fisher to take Siver down and submit him.
Pick: Fisher

Chris Leben vs. Aaron Simpson
Simpson has the kind of athletic pedigree (an All-American wrestler at Arizona State) and the kind of record (7-0 in MMA and 3-0 in the UFC) that would make him one of the best young prospects in the sport ... except that he's not young, having started his MMA career in 2007 at age 33. So I don't see Simpson ever becoming one of the sport's truly elite middleweights, but I do see him staying unbeaten against Leben.
Pick: Simpson

Jamie Yager vs. Rich Attonito
This is one of those fights, like Junie Browning vs. David Kaplan in 2008, that the UFC puts on the live Spike TV finale not because the fighters have earned it in the Octagon, but because the fighters' antics in the Ultimate Fighter house has fans hoping to see someone get a beatdown. I'm not a big fan of that approach, but I do think the fans are going to get what they want, as Attonito will finish Yager, the guy who made a name for himself by acting like a jerk in the house, but who quit on his stool after Josh Bryant bullied him in the cage.
Pick: Attonito