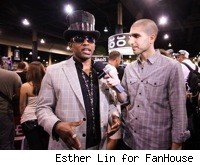 MMA Fighting recently spoke to colorful veteran Shonie Carter about his wild career and whether or not he was done fighting.

The 38-year-old "Mr. International," who has been involved in 80 pro fights, said that his career is far from over. As a matter of fact, he has just begun what he is calling a "belt-snatching tour."