Scott Coker to Dana White: 'Can't We All Just Get Along?' 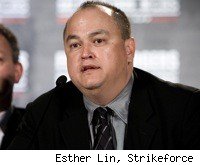 When MMA Fighting asked Dana White following UFC 115 whether he was concerned Strikeforce would try to re-sign their middleweight champion Jake Shields, the UFC president made it very clear, once again, that he does not view the San Jose-based organization as being any kind of threat.

"Strikeforce doesn't mean jack sh** to me," White said. "I could care less what they're doing. I can't even believe that people put their name in a conversation. 'Oh, what about Strikeforce?' What about Strikeforce? They're minor league. You might as well ask me about what is going on with the DEF or the ZBY or some other small organization from around the world."

When we asked Scott Coker to respond on Monday's edition of The MMA Hour, the Strikeforce CEO channeled his inner Rodney King.

"It doesn't have to be that black and white. But honestly, when I wake up, I'm not thinking about what they're doing. I'm just focused on how we can run our business. We have a lot of work ahead of us and we're just moving forward."

As for the negotiations with Shields, Coker said they are ongoing, but there appears to be a "discrepancy" between how much Strikeforce is willing to pay for his services and what Shields believes he deserves to be paid.

"We continue to have dialogue with his dad, who's his manager, and you know, Rich [Chou], who's our matchmaker. He has a good relationship with Jake and his father, and they've done the numbers dance and they'll continue to do that until Jake makes a decision. But where he is going to end up? Who really knows," Coker said.

"At the end of the day, Jake has something he feels his value is and we feel the value is in a certain area, and there's a discrepancy there."

One thing is for certain, though, Coker doesn't want to get into a bidding war with the UFC over Shields' services.

"It has nothing to do with a bidding war, it has to do with, what is the value of the fighter? And the value of the fighter, to me, is based on: does he get great TV ratings? Is he a great fighter? Does he put butts in seats? And every fighter is different. Does he have that X factor to become a supersta?. So every athlete we evaluate differently, and most of the time, the fighter feels that their value is slightly higher than the promoter is willing to pay."

Should Shields ultimately decide to sign with the UFC, Coker said the organization will hold a tournament to crown a new 185-pound champion. He wouldn't say how many fighters would be involved in the tournament, but one would expect the likes of Ronaldo "Jacare" Souza, Tim Kennedy, Luke Rockhold and the winner of next Saturday's Cung Le vs. Scott Smith rematch to be involved.