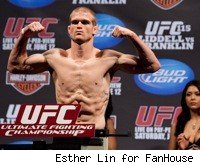 So where does Evan Dunham fit into the UFC lightweight division, now that he has improved to 11-0 by defeating Tyson Griffin for his biggest victory to date? One UFC fighter who has fought for the lightweight belt twice believes Dunham is getting close to the top of the division. I think he's right.

Kenny Florian said this week on ESPN's MMA Live that he views Dunham as being one of the top lightweights in the sport.

It feels a little premature to talk about Dunham as being on that level, but maybe it shouldn't: It's not like the 28-year-old Dunham is just a kid who needs to be brought along slowly. He already has four fights and four wins in the UFC, and I'd like to see him continue to take steps up in quality of competition, just as he did when he took on Griffin.

Florian suggested that Dunham's next fight should come against the winner of the UFC 116 bout between Kurt Pellegrino and George Sotiropoulos, and that sounds about right to me. The UFC's lightweight division will most likely shake out over the next six months to a year with the winner of Florian's upcoming fight against Gray Maynard taking on the Frank Edgar vs. B.J. Penn 2 winner for the title. By that point, if Dunham has another couple wins under his belt, he'd be right in the mix with those four.Florian thinks Dunham would be a legitimate threat to anyone at 155 pounds.

"Dunham just put on the performance of his life -- Tyson Griffin is a great veteran fighter," Florian said. "Dunham just had the big advantage with the grappling. Dunham is a very underrated grappler. Once he got position, Tyson was just not getting out. ... Dunham started using his reach and using his takedowns to really confuse Tyson. Tyson couldn't get his rhythm going because he had to respect those takedowns. That's a good exampleof how you need to mix it up in mixed martial arts."

It's a good thing Florian has already started breaking down Dunham as a fighter. They could be fighting each other down the line.