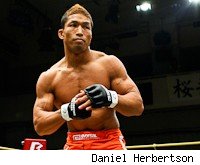 Akiyo "Wicky" Nishiura, who TKO'ed Hideo Tokoro at DREAM.14, was the preferred MMA representative but an injury sustained in that fight has kept him from making his K-1 debut.

Shohei Asahara, Toshiki Taniyama and Koya Urabe, who were all victorious in the opening round of the 63 kg tournament but failed to earn a spot in the Final 8, have been added in reserve fights.